The owner claimed that it worked fine, but just needed a new battery. It was sort of the opposite when I first got it; the battery was low but still okay, and the shutter would only fire about 25% of the time. On the way home in rush hour traffic, every time I was stopped I would grab the camera and fire it a few times, and by the time I got home it was working 100%. It has continued to work reliably ever since, even after long periods of not being used.

Now, I'll say that I was a little disappointed when I first held it -- maybe it's because every 35mm film camera I own is of the older all-metal variety, but I didn't expect the P30T to be entirely plastic. I guess this isn't entirely fair, as the build quality is probably fine. It's just disturbingly light, and light weight cameras tend to feel cheap. 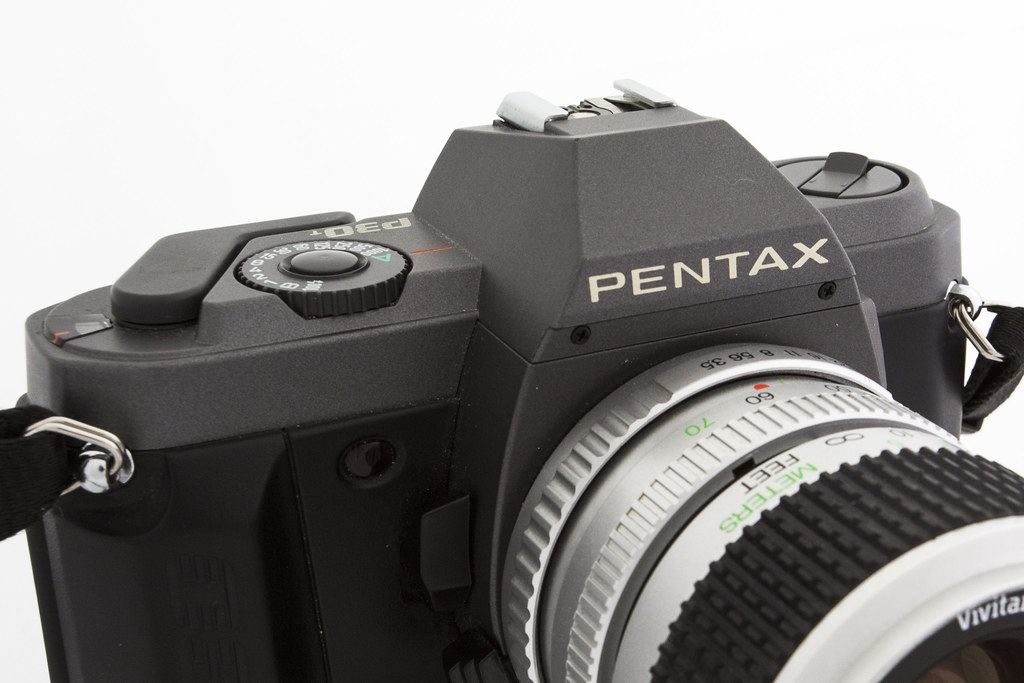 The shutter is electromagnetic, requiring batteries to operate. It has a range of 1 to 1/1000 second, plus bulb exposure and a flash sync speed of 1/100 sec. All of these are selectable from the main dial on the top of the camera. It also features an exposure lock button, as well as a mechanical depth of field preview button. A port for a mechanical remote release sits alongside the lens mount.

In use, the shutter release results in a loud, hollow clunk as the mirror flips up and returns. It's almost as if this was an intentional decision, like Pentax looked around at the other offerings by their competitors and thought, "What's with this focus on quiet shutters? We want no part of it." It almost sounds like a smaller version of the mirror noise on a big medium format SLR like a Mamiya RB67. Maybe not quite that bad, but people are going to know you're taking pictures, that's for sure.

It Starts To Get Weird 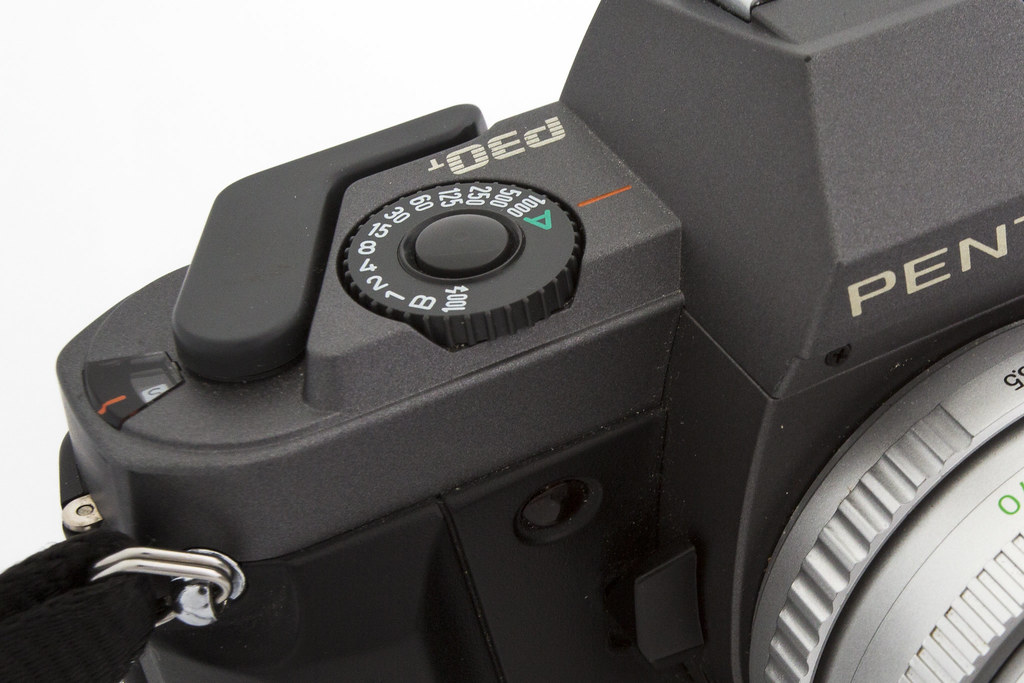 Every camera has its quirks. Questionable design decisions that someone thought would be a good idea at the time. Sometimes it's a minor thing that you hardly ever notice, and sometimes it a bigger thing that takes a little while to get used to. For years, Nikon insisted on requiring that you pull out the advance lever in order to start metering, which for left eye dominant people like me, creates a nice eye-poking stick just in front of your right eyeball. If you're using any of the auto modes on the Canon A-1 and you use the depth of field preview, returning the camera to its previous mode creates an error condition that requires that you flip the multiple exposure switch and wind the advance lever before the camera starts working again. What?

Anyway, the P30T is no exception. The flash only works at 1/100s unless you're in full manual mode, unlike most cameras which will allow you to use any speed up to the max sync speed. That's a quirk, but not one I'm likely to run across often since I rarely shoot with a flash.

It's the viewfinder display that really gets me. An annoying, blinky, color-coded monster. It primarily displays the range of shutter speeds lit by LED, as well as "M" and "P" depending on your current mode. Shutter speeds are green if they're above 1/60s. Below that, they're orange.  According to the manual, this is to alert the user to possible camera shake issues, but it doesn't take into account the lens you're using, so that's pointless.

When you're in aperture priority or manual, the metered speed blinks at you constantly, while your selected shutter speed is solid.  It's easy to forget which is which, so I often have to rack the aperture ring back and forth a bit to see which number starts moving.  Then you adjust your selected speed until they come together into one unblinking number. Unless you're out of range, in which case your shutter speed will continue to blink anyway. Or if your battery is low, which causes the entire damned display to blink. And they blink at different rates, too.  So you might have one number blinking quickly and another blinking slowly, at the same time. Oh, and guess what happens when you use the exposure lock button?  Yep, the shutter speed blinks.

Finally, the DX requirement.  At some point someone clearly said, "Now that DX coding is a thing, obviously we don't need to allow people to manually set their own ISO ever again." Sure, because no one ever wants to overrate their film or use bulk loaded film. So I have to resort to tin foil and paper carefully cut out and taped to the side of my cartridge in order to use my bulk film in this camera.

It's Not All Crazy

The P30T does have its moments.  When used with a fast lens, the viewfinder is bright and easy to focus. Even at f/4.5 the split image circle is still quite usable (although the microprism collar starts to suffer around then). It accepts K-mount lenses, which are plentiful and generally very inexpensive. And I'll admit, as someone accustomed to carrying cameras weighing from 2 to 6 pounds around my neck, the light weight of the P30T can certainly feel nice on a long day.

Overall though, this really isn't the camera for me. I'll take a little extra weight, I just love the feel of the metal-era SLR's. Of course that's not a deal breaker, nor is the blinktastic viewfinder.  Mostly, I'm annoyed by the DX requirement as a person who routinely shoots bulk rolled film, and routinely over and underrates that film as needed.  Don't let one man's opinion dissuade you though -- if you don't mind the DX issue, it's a capable little camera that I wouldn't hesitate to bring with me if my other SLR's were out of service. Plus, I have to admit I like the Blade Runner vibe.

I'm going to keep it in my arsenal for a while. If it doesn't end up getting any use, I'll donate it to the film program at my local non-profit art school where I know it will have a long life helping people learn about film photography.
at May 13, 2016