The Olympus OM-10 was the first consumer-grade OM system 35mm SLR on the market, introduced in 1979. This particular camera was given to me by my stepdad in what can only be considered a film photographer's dream scenario, namely: "Here's a big box with several cameras, lenses, and other assorted gear. Take whatever you want, I don't want it in the house anymore."

Of course, after a couple of decades none of these cameras were at 100%, though they generally only require a CLA or minor adjustment to get them back to their former glory.  The OM-10's only imperfection is a bit of an odd one.  When the ISO setting is at the highest value of 1600 and the shutter is released, the mirror flips up only half way and the camera emits a random series of chattery beeps, like an 8-bit squirrel on methamphetamine.  It won't stop until I move the ISO to a lower value, at which point the chattering stops and the mirror resets to its resting position. 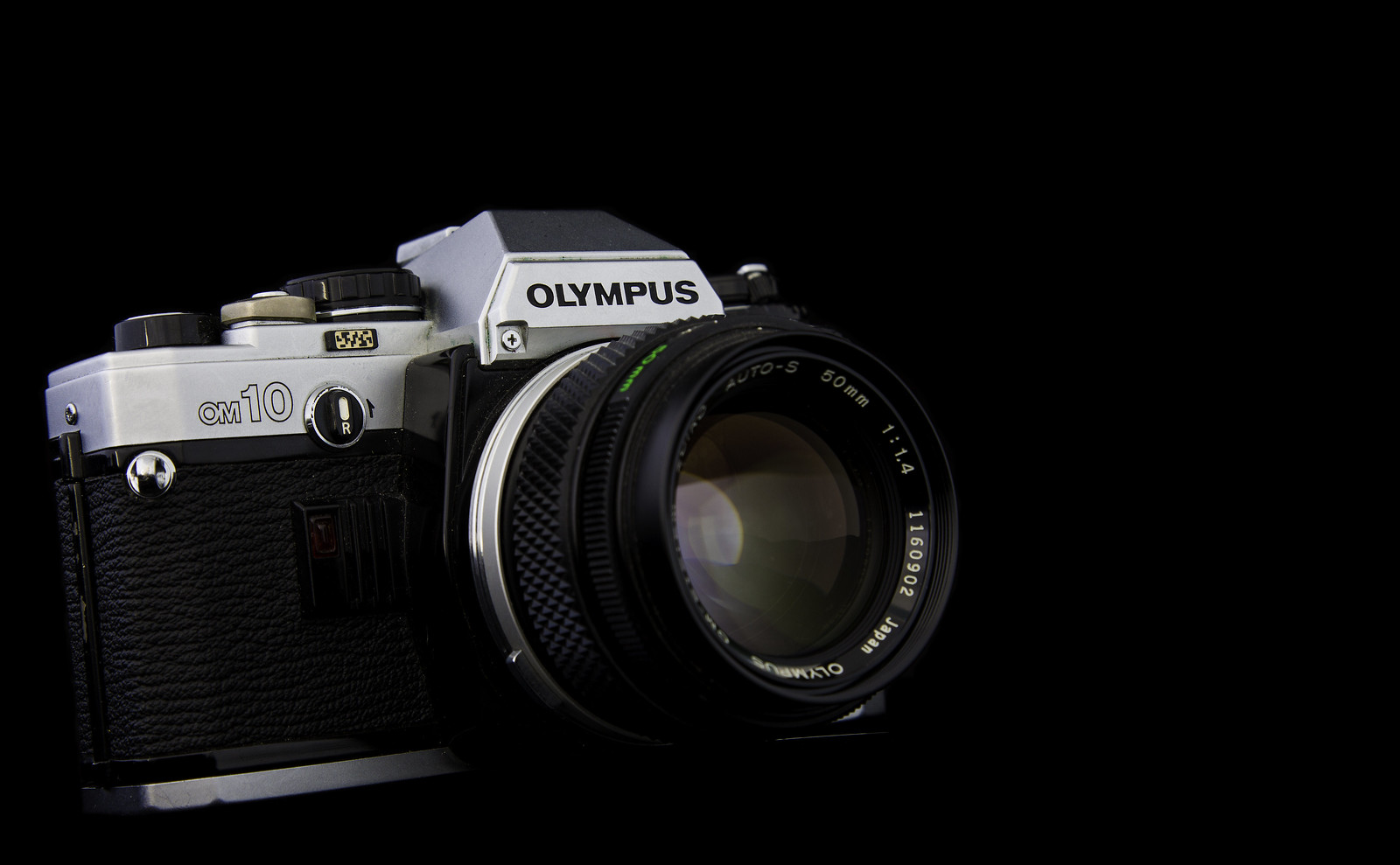 The body alone weighs right around a pound, slightly lighter than the single-digit professional lineup. The overall feel is a bit cheaper than the pro models, with more plastic components and slightly less confidence-inspiring dials. Even the film advance feels cheaper - not in a way that worries me, but the overall sense is definitely that of a less expensive camera.

Film advance is operated by the usual thumb crank. The film rewind lever is (obviously) on the opposite side, and is enabled by a small rotating switch on the front of the camera below the shutter release. Turning this 90 degrees allows the film to be rewound into the canister.

There is a collar around the film rewind lever that acts as a four-position switch; Battery Check (a light and beep signifies that the battery is working), a self-timer (~12 seconds), and meter on and off.

The meter on/off positions are a bit curious.  When set to ON, the metering is turned on and you can see the LED in the viewfinder displaying the appropriate shutter speed, as would be expected.  After 90 seconds, it turns itself off and a half-press of the shutter release can turn it back on again.  If the switch is set to OFF, everything is turned off to conserve battery power.  However, if you try to take a photo while the switch is still off, it will allow you to do so -- the meter will come on just long enough to determine an appropriate shutter speed and the shutter will be released, and then the camera will immediately turn off again. No information is displayed in the viewfinder during this process.  This is an interesting feature, and if you're shooting in Auto (aperture priority) mode and you forget to move the switch to ON, this could allow you to get the photo in time before the moment is gone. On the other hand, if you're shooting in Manual mode you're likely to notice that the meter isn't working before you take the picture anyway.

The dial just to the left of the shutter release sets the film speed (ISO 25 to 1600, or in my case, ISO 25 to 800 plus "squirrel") and exposure compensation (-2 to +2 stops) values, which are locked together as one. By lifting up on the outer ring, the indicator can be lined up to the desired film speed. If exposure compensation is desired for one or a series of photos, this dial is also used. For example, let's say you're using ISO 400 film.  You would lift the ring and twist until the white mark lines up with the 400 on the dial. If you later want +1 stop of exposure compensation for a shot, you would lift the ring and turn the dial so that the "+1" is lined up with the 400.

The mode switch is rather inconveniently located between this dial and the film advance lever, so it's a good thing that it's one of the less-used features of the camera.  This switch puts the camera into bulb mode, auto mode, or manual mode.  Auto mode is the aforementioned aperture priority mode.  You select the desired aperture on the lens, and the camera chooses the appropriate shutter speed based on the center-weighted average light meter.  The shutter speed is displayed in the viewfinder, as well as warnings if the aperture puts the shutter speed out of the supported range (1s to 1/1000s).

Bulb mode, as usual, leaves the shutter open for as long as you hold down the shutter release button (or the plunger on the remote release cable), for long exposure photos.  Manual mode does nothing unless you have the adapter.

Honestly, I have no idea why Olympus opted to make manual mode a purchased upgrade rather than integrating it into the camera to begin with. But for whatever reason, they did. So you'd buy this little plastic box that attaches the the front of the camera near the lens, and it has a shutter speed dial on it.  When in manual mode and with this adapter attached, the in-camera light meter shows you what the suggested shutter speed is based on your aperture setting on the lens, just like in Auto mode.  However, in Manual mode the shutter speed setting on the manual adapter always overrides the light meter's reading.

I really like the OM-10, but it's not going to be my primary 35mm camera. I have a couple of OM-4T's (to be reviewed later) that I will always pick up first, primarily for the far more advanced metering options. In use though, I have no real complaints about the OM-10.  It's relatively quick to use, and the metering-on-demand feature that determines a shutter speed for you when you forget to turn the meter on has saved me from several lost shots because I do sometimes forget to turn the camera on before bringing it up to my face.

I guess one minor gripe (and this is an issue shared with even the venerable OM-4T) is that there's no shutter release lock switch.  When I shoot, my instinct is to immediately wind to the next frame. If the camera had a lock switch, I could then lock it to protect from the shutter being inadvertently tripped.  What I have to do instead is force myself to not advance the film until I'm ready for the next shot -- the double exposure prevention lock will not allow the shutter release to be pressed twice on the same frame.

When it comes to older 35mm SLRs, I usually want to consider the system more than the camera itself.  After all (and this is particularly true of the consumer grade cameras like the OM-10), film cameras are basically nothing more than light-tight boxes that have film at one end and a lens at the other.  The camera bodies themselves have absolutely no impact on the final image.

If looking for a good first 35mm SLR, and with no current investment in a given system, the OM-10 (with the adapter) sits just about even with the cameras at the same position in the lineup for the other major manufacturers such as Minolta, Canon, Nikon, and Pentax. If offered an OM-10 for a great price, it's a no-brainer. If you can find one of its competitors in the same condition for a better price, then go that way.  It's true that the OM Zuiko glass is generally pretty exceptional, but I'm sure equally good lenses can be found for the other mounts as well.

If you do end up with an OM-10, Olympus has made the user manual available here in PDF form. As I continue to discuss the cameras and lenses in my collection, I'll add links below to relevant posts, like those for OM-mount lenses.

As always, feel free to comment with questions, corrections, etc!