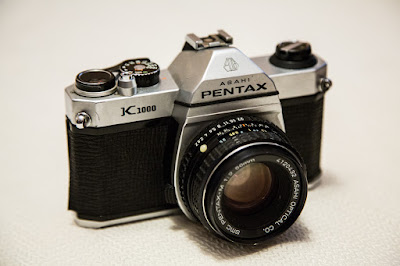 The K1000 has a solid metal construction, and its lack of advanced features means it has a clean and easy to understand layout. 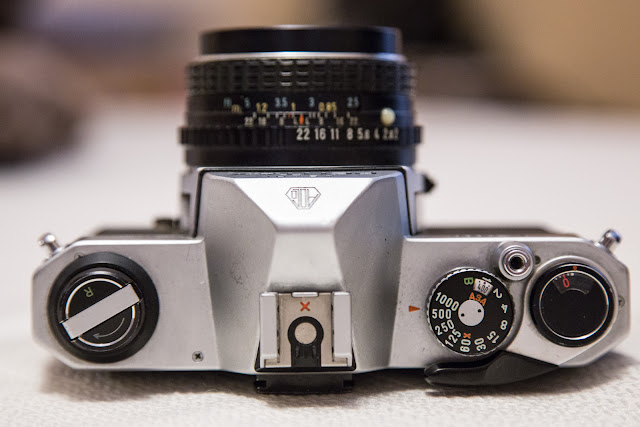 Lifting the film rewind knob opens the film door, as is the case with most cameras from this era.  The main dial can be rotated to select the shutter speed (from 1/2 sec to 1/1000 sec) or set to bulb. Lifting the outer ring on the dial and rotating will set the ISO, which is visible through a window on the dial. The shutter release button has a reasonably short travel and is sensitive enough to press without shaking the camera, but not so sensitive that it's easy to press by accident. There is no lock on the shutter button, so be aware that a good knock could inadvertently trip the shutter. For this reason, I'd recommend that after shooting a frame, avoid advancing the film until you're ready for the next exposure. Until the film is advanced, the shutter cannot be tripped again. The film counter is embedded in the film advance lever. There's a PC sync terminal on the front of the camera, opposite the lens release lever.

The lens mount is a Pentax K bayonet mount, and second hand lenses for this mount are plentiful and cheap.

The viewfinder is extremely simple; it uses a microprism spot as a focus aid, and there's a needle on the right that points to underexposure, correct exposure, or overexposure.  Since it uses a common LR44 battery, it's much easier to power than the very similar Spotmatic, which uses a discontinued mercury battery.

Metering is full-scene average and is the only reason for the battery.  The shutter is fully mechanical and does not require a battery in order to operate.

Honestly, it is what it is.  This is a very simple camera using a very familiar control layout. You set the aperture on the lens, set the shutter speed on the main dial, focus, and shoot. There are no other features.

Flash sync is a rather slow 1/60 sec., which isn't as good as the 1/125 sec sync on the similarly priced (and recently reviewed) Nikkormat FT2. It works though, and if you're not much of a flash user (I am not), then this makes little difference.

The film advance feels... utilitarian. It does the job, but without any apparent interest in user experience. The mirror slap is loud, so don't expect to shoot without being noticed (although to be fair, I think all of my cameras from this era are pretty loud).

The full scene average metering is a bit pedestrian, but it's really not all that bad. At least you know what you're getting and you can keep an eye out for highlights and shadows that might ruin your exposure. Meter off of something neutral, lock in exposure and then recompose.

Compared to the Spotmatic SP II

People are bound to make this comparison because the cameras are nearly identical at a glance.  Both can be had for next to nothing. But there are several differences. The Spotmatic II is five years older (released in 1971), but it has a flash sync mode selector switch for focal plane or X-sync, a self timer, and a film exposure reminder window (you set it to the number of exposures on the roll so you know when to rewind it). On the other hand, the metering is more convenient on the K1000 because it's capable of open-aperture metering. On the SP II, stop-down metering is required, which adds a couple of steps to the process. Of course, the biggest difference is that the SP II has an M42 screw mount, while the K1000 has a K bayonet mount. The screw mount can be quite a bit more annoying than a simple bayonet, but on the other hand, there are tons of cheap glass out there in M42.

What About That Lens?

Well it turns out, it's pretty great! Even shooting wide open, I was able to get a shocking level of sharpness out of it.  The aperture ring clicks solidly into place at each stop, and the focus ring is smooth and well-damped.

The bottom line is simplicity and strength. This is the kind of camera that you bring with you when you're scared to bring any of your nicer cameras, but you still want to get the shot. But it also serves well as a primary camera, especially considering how inexpensive it is to buy one. If you're just getting started in film photography and you're on a tight budget, you really can't go wrong with this.

If I left anything out, if you have any questions I can answer, or if I'm just plain wrong, leave a comment and let me know!
at January 27, 2016